When Switzerland outsources its uninsured patients

Sabrina Roduit is a researcher in sociology at the University of Geneva. She is interested in the trajectories of people in precarious situations, often rendered invisible, such as migrants, people without legal status or homeless people.

As part of her doctorate, Sabrina studied the health care pathways of people who have no health insurance in Switzerland. She highlights mechanisms of inclusion - and exclusion - in the medical environment.

Sabrina proposes an analysis of the norms that participate, more or less explicitly, in the sorting of patients. This story is based on interviews with these people, conducted between 2016 and 2017.

This story is told in French. 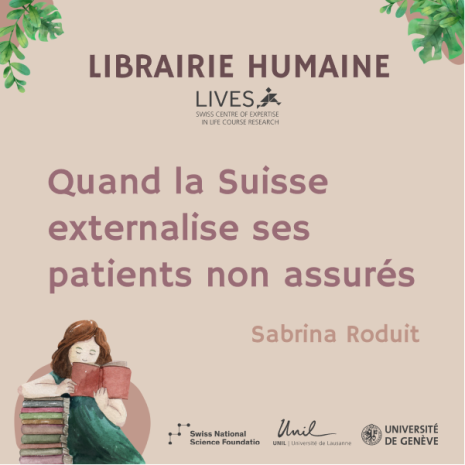 When Switzerland outsources its uninsured patients

In access to health care, one might think that the sorting of patients began with the covid-19 period. In reality, it is a long-standing mechanism. For the past seven years, I have been studying the health trajectories of people who live in Switzerland, in Geneva, without health insurance. These are people who are invisible, often without legal status, or at least with a migration background. There is a health centre accessible to people in precarious situations. However, not all of them get all the medical care they need. Sometimes consultations and medication are paid for. Sometimes they have to contribute a little bit. Other times, they are told that it is not possible to be treated in Geneva. Sometimes the medical staff even recommend that they go to France, on the other side of the border, to be treated. These are their stories that I would like to share with you. These singular trajectories, put end to end, allow us to understand the logic of sorting out patients in precarious situations in a medical environment.

Let's take the story of Alberta, whom I met five years ago. Alberta is fifty-five years old, she left Spain where she is originally from and alternated between odd jobs and travelling. When she was about 20, she had contracted viral hepatitis after sharing needles while using drugs. She has been living in Geneva for about ten years, where she does odd jobs and has a partner with whom she plans to get married. When she went to see a doctor in Geneva for her hepatitis, the doctor told her that treatment was extremely expensive, that without legal status or health insurance, it was impossible, and that for the time being, it was not indicated anyway because her hepatitis was "dormant" and could remain for several years without risk to her health. As for the substitution treatment she was taking before, he told her that it was not a priority. She will therefore not have access to treatment in Switzerland. However, she can go to Annemasse, not far away in France, to a facility where she can get treatment. He adds "as a European, it will be easier". Alberta explains to me: "But I've never been there, what am I going to do in France, I don't live there! What I do is buy my meds illegally, behind the station. And that way, it's not more expensive, and I stay at home. Thus, this proposal to seek treatment across the border ended up not being used. Several years later, Alberta managed to stabilise herself professionally and obtained a residence permit, a B permit. She is supported by a social worker in her efforts, joins the health insurance scheme and has medical follow-up with a GP. The latter was alerted by the deteriorated state of her liver, due to her hepatitis, and recommended that she start treatment immediately. But after how many lost years...

Delphine comes from France and, for personal reasons, does not want to go back there. She has had a breakdown, both in her family and professionally. At forty, she has made a transition in her gender identity. Born a man, she became a woman. She lives in her car, has travelled all over Europe, and for the past few years, feels at home in Geneva. To feel like herself, she needs her hormone treatment. Her doctor refuses her because "for him, it's not a priority". Moreover, he often says to her "but why don't you go back to France, where you had social security? No way, for Delphine, whose life is now in Switzerland. She ended up giving up on seeking medical attention.

For Aminata, from West Africa, it's another obstacle course. She lives with an infection that requires daily treatment. When she arrived in Geneva, she was taken in by a fellow countrywoman and her husband, who supported her in her request for treatment. She soon realises that getting treatment at the infectious diseases department will be complicated. The doctor who receives her wants to help her, gives her "medicines from the cupboard" at his discretion, but this is a short-term solution. As for the department's social worker, she tells her bluntly that without health insurance, without work, nothing will be possible: "this is not social assistance, and you'd better go back to your country. Aminata is stunned. At the same time, with the help of her friend, she will initiate treatment in France. Thanks to the French state medical aid system, and with the support of a patients' association, she will be able to obtain her vital treatment much more quickly.

Through these three life stories, we can see that this sorting out of access to care is a daily reality. In my research I found that this sorting was not necessarily done objectively, according to medical criteria, but also according to normative criteria. These criteria are: first criterion: citizenship, the fact of being Swiss or integrated via a residence permit, second criterion: social and economic usefulness, one is taken care of more if one has a job, and third criterion: the fact of excluding, pushing back trajectories that appear to be deviant, non-standard (drug use, homelessness, unemployed, etc.).

By pushing the care of these people outside our borders, this helps to exclude them from our radars, from our statistics, and to make them even more invisible.